The Original HMS Buffalo and its Story

This vice regal ship brought Free Settlers to the new colony of South Australia in 1836. 176 passengers were on board and the voyage lasted for 158 days. During this time the ship encountered many different weather conditions from dead calm to severe storms and hurricanes.

HMS Buffalo was a storeship of the Royal Navy, originally built and launched at Calcutta in 1813 as the merchant vessel Hindostan. The Admiralty purchased her that year after she arrived in Britain. She later transported convicts and immigrants to Australia, before being wrecked in 1840. – wikipedia 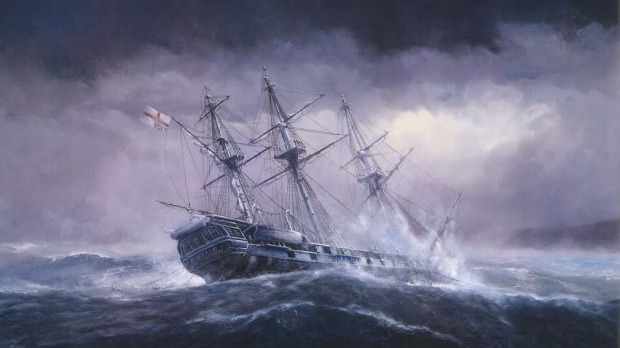 Captain Hindmarsh, who on arrival became the first Governor of South Australia, was in charge of the Buffalo . George Stevenson, his secretary, kept the ship’s daily log. In our ships museum you will be able to read extracts from the official log and excerpts from Stevenson’s personal diary. You will be able to spot the contradictions between the log, which illustrates Hindmarsh as a caring, considerate Captain and the diary, which describes him as a foul-mouthed tyrant. Stevenson’s diary is substantiated by diaries kept by other passengers and crew members. 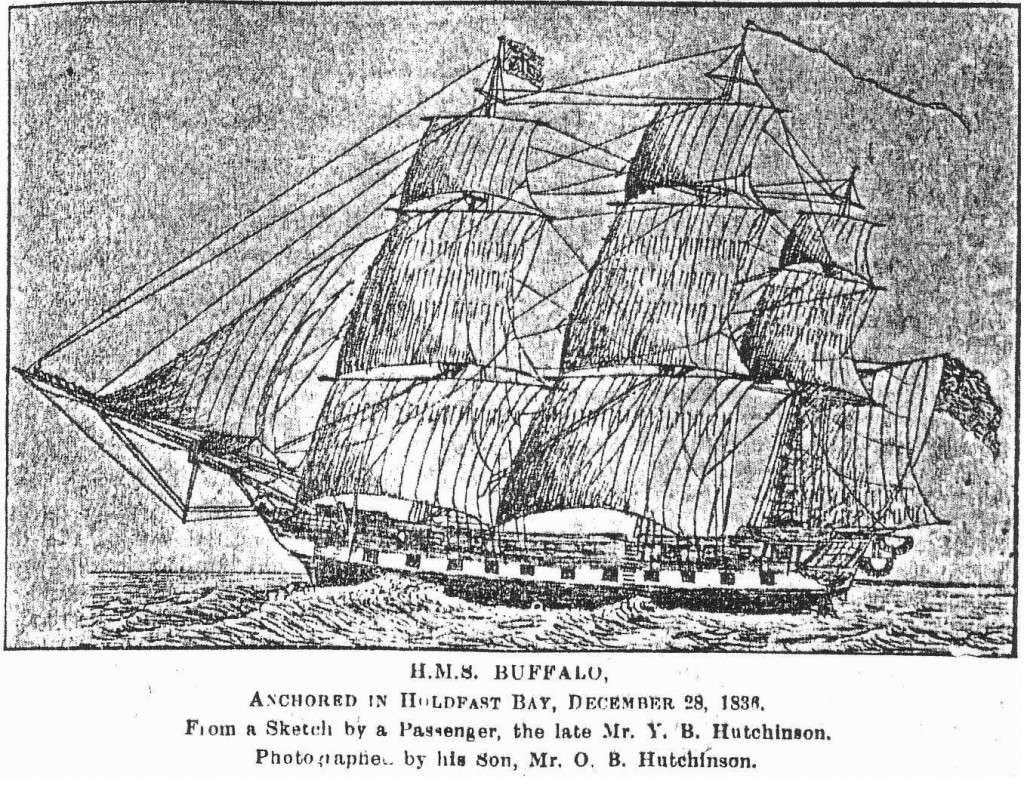 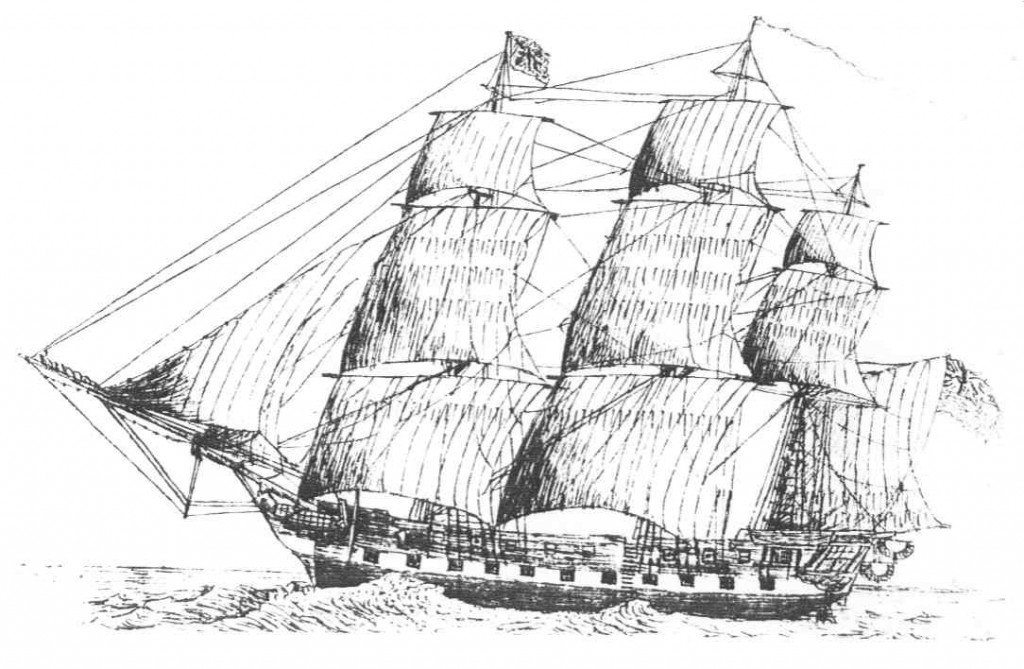 These first settlers were British men, women and children, many of whom had paid for their passage.It is said that they and their crew were often entertained by BUZBY, the ship’s tame parrot. Buzby had made the ship his home after joining it in the tropics.

The Buffalo first reached Australia in 1833 after being fitted out to carry convicts to New South Wales.

It left Portsmouth on July 23, 1836, arriving at Holdfast Bay on December 28 – Proclamation Day. It was its only trip to South Australia.

After its history-making voyage to South Australia, the Buffalo was mainly used to transporting convicts from England and Canada to the colony in New South Wales, and shipping timber from New Zealand back to England.

It was while waiting for another cargo of timber to be loaded in New Zealand – at a spot Captain James Cook had previously declared to be a safe haven – that disaster struck.

The Buffalo was at anchor in Mercury Bay on July 29, 1840 when an enormous gale blew up, some reported it as hurricane force, and the ship was wrecked. 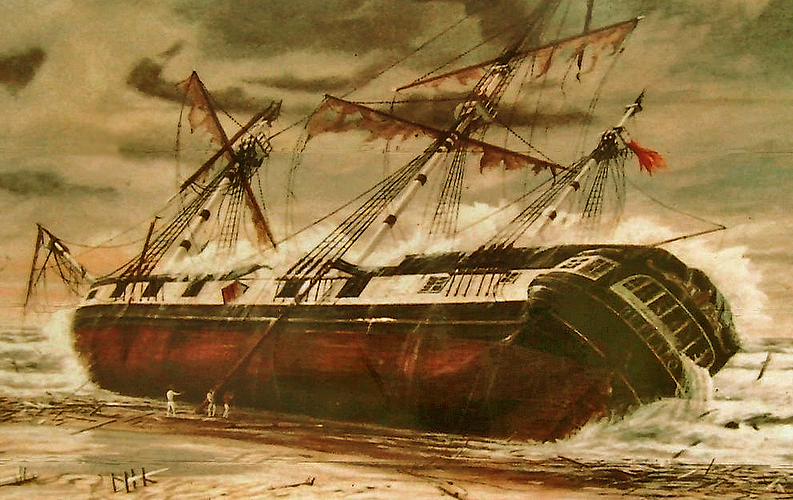 Two of the Buffalo’s crewmen were drowned when a lifeboat capsized when they were trying to reach the beach.

The Buffalo currently lies about 200m from the high water mark at Buffalo Beach. It was a sad end for the square rigged 123-foot (40m), 604-ton teak construction ship that was launched in Calcutta, India in 1813 as the Hindostan. 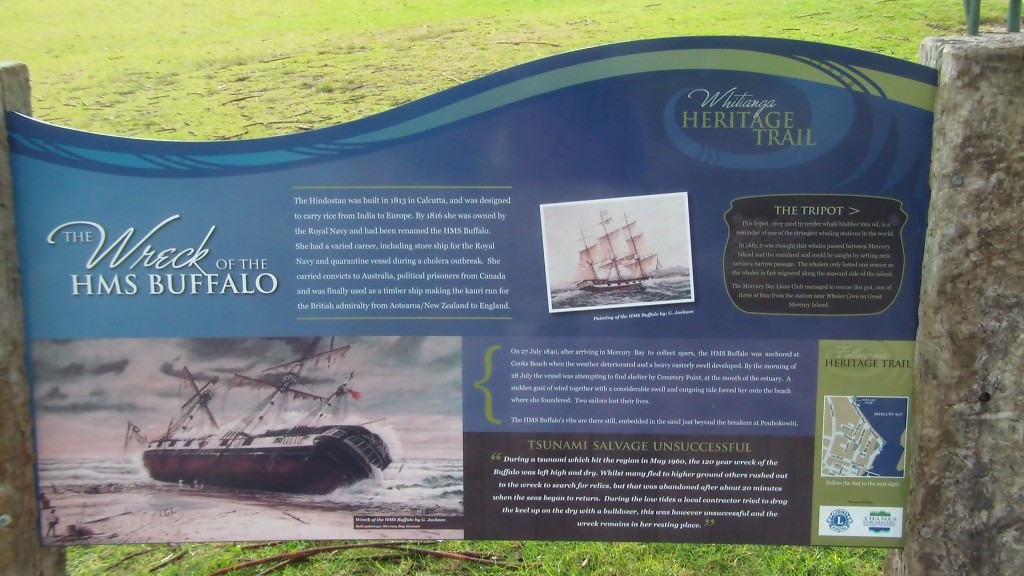 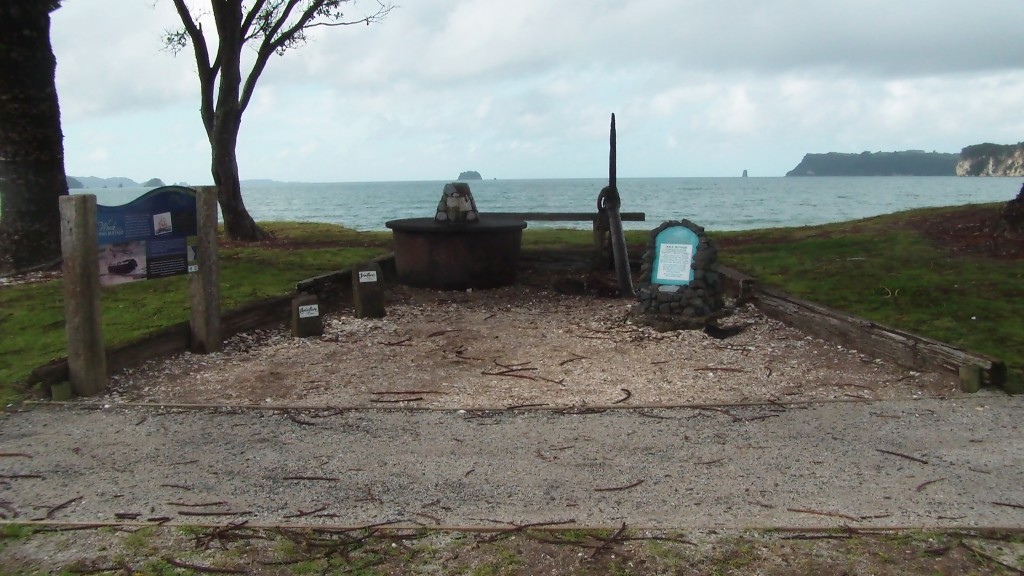 Until the late 1920s the wreck of the ship was visible from the shore, known locally as Buffalo Beach, but it then disappeared as it settled further into the sand of the bay.

It made a brief reappearance in May 1960 when the tide in the bay went dramatically out because of an earthquake across the Pacific Ocean in Chile.

The expedition of 1986 used local knowledge and photographs from that time to again find the final resting place of the Buffalo.

It required special permission from the New Zealand Government for the Australians, from the Nautical Archeological Association of South Australia, to dive on the site.

The divers spent seven days in the water with the wreck of the Buffalo and recovered artefacts including pieces of the wooden planking, brick ballast and an iron bolt.

Even though the water is relatively shallow, diving on the wreck was difficult because silt in the water reduced visibility to less than 1m, making it difficult to take a clear shot of the remains of the Buffalo. 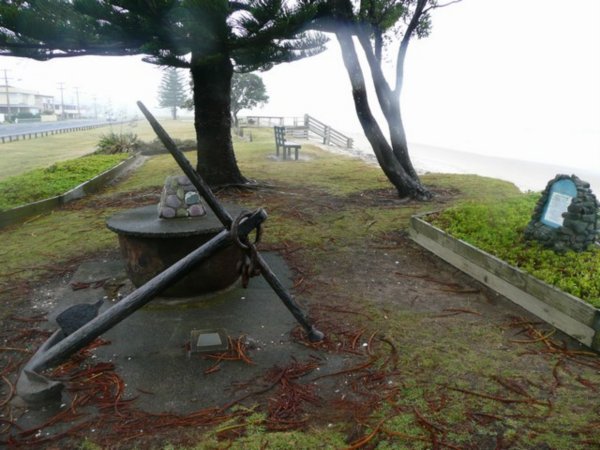 All that is left of the Buffalo now is the carcass of the ship.

The ribs that formed the hull are still in place, the bricks that acted as ballast are there, but little else. Many relics have washed up on the beach over the years and some are in a small museum by the shore.

Much else was salvaged when the ship sank in 1840. 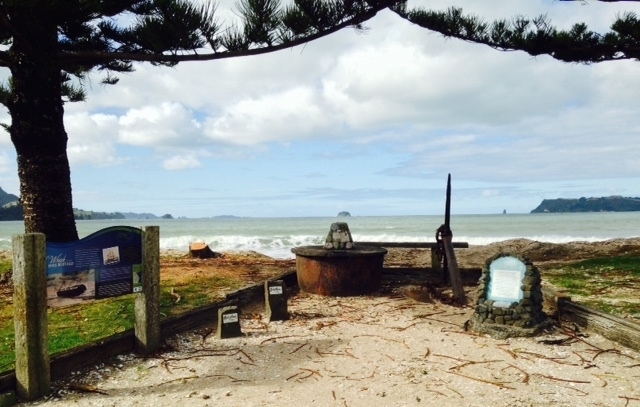 Display at the Mercury Bay Museum in New Zealand 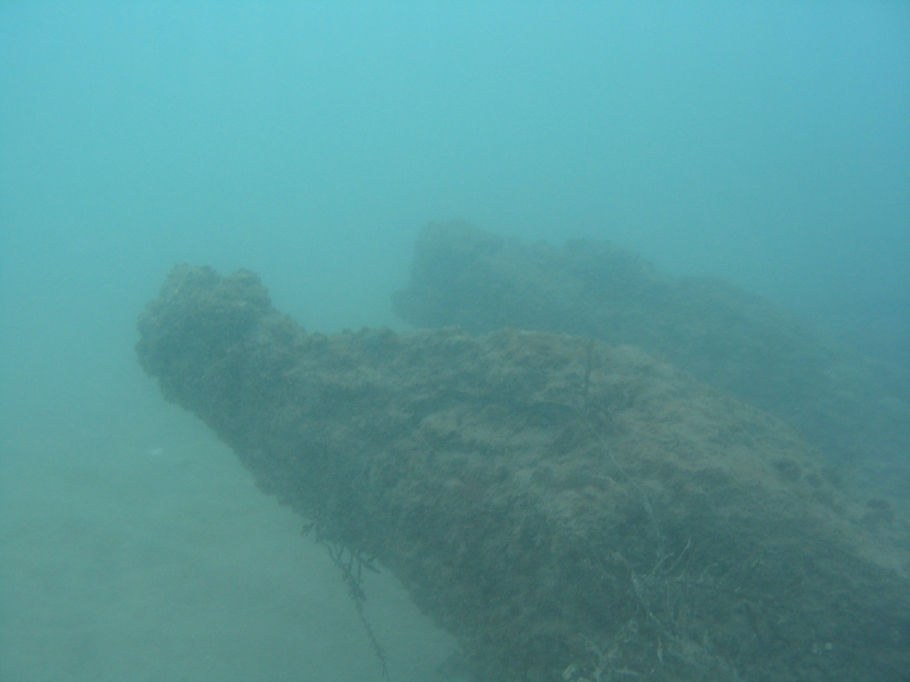 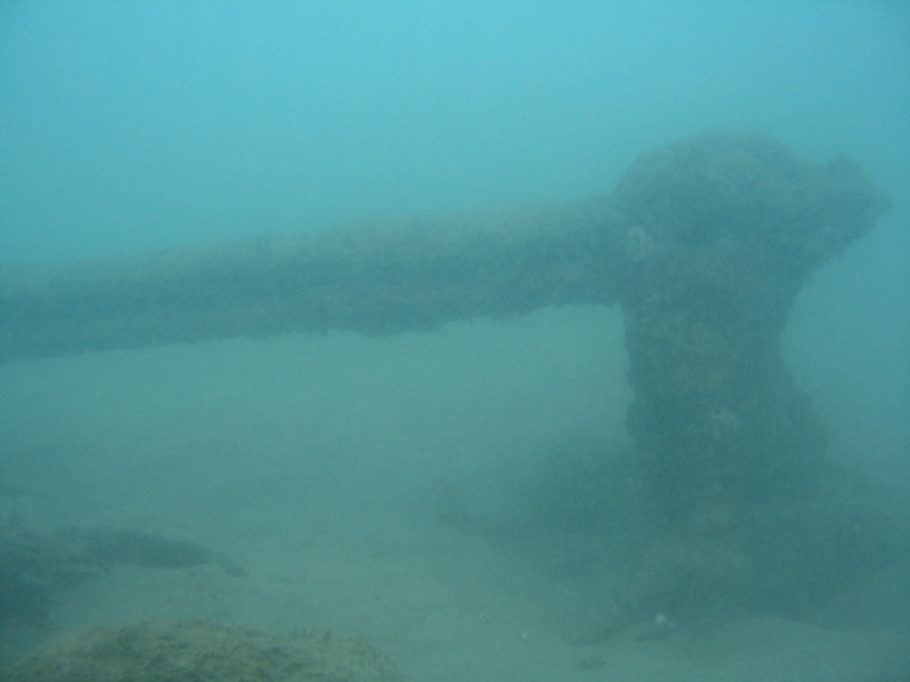 Model of the 1813 build HMS buffalo 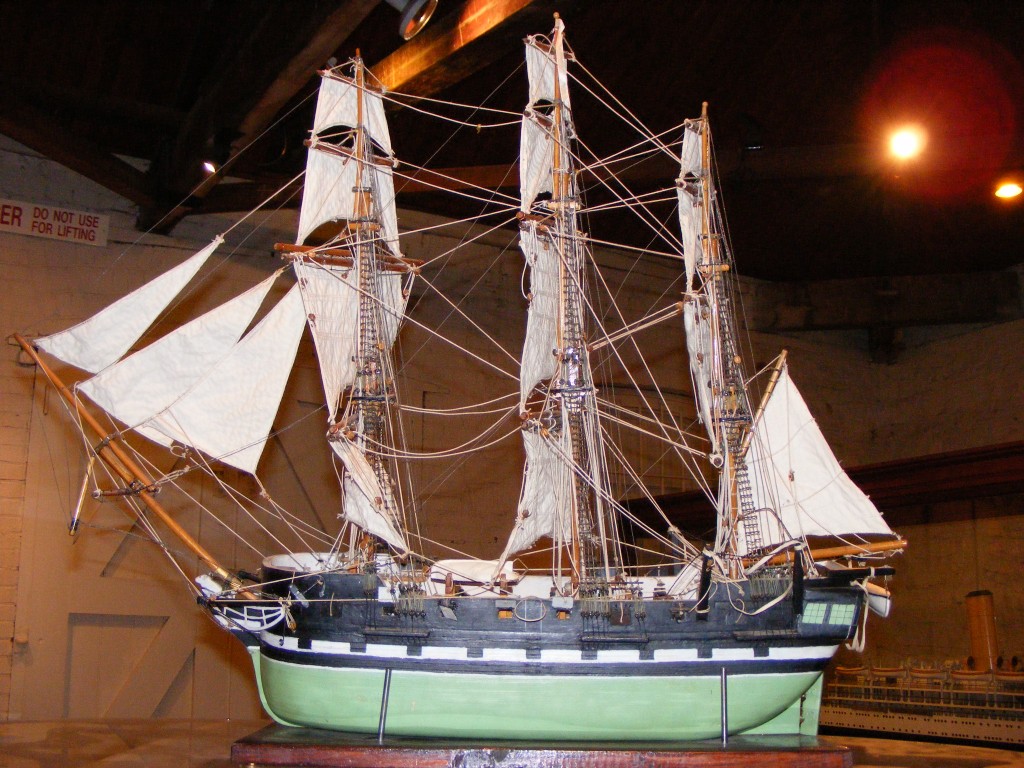 Buffalo was commissioned in November 1813 under Mr. Richard Anderson, Master, and became a ship of many uses and refits. Anderson was still her master between 1814 and 1815 when she was stationed at the Army Depot at Bermuda. Then in January 1816 Mr. W. Hudson became master.

Then in January 1833 she was fitted as a convict ship, and F.W.R. Sadler took command. Buffalo sailed to Australia 12 May 1833 and arrived on 5 October 1833. She carried 180 female convicts, one of whom died on the journey.

Buffalo was an important ship in the maritime history of South Australia, serving at times as a quarantine, transport or colonisation ship, while also aiding the British expansion into New Zealand, New South Wales, Tasmania, and Upper Canada. Sadler received gifts from the local Maori chief Titore in the Bay of Islands during one of HMS Buffalo’s trips. The gifts included a pin, a club, and an ornate Hei-tiki, all now in the British Museum.

Buffalo was paid-off and recommissioned in January 1835. Then James Wood took command in July 1836. Buffalo sailed fromPortsmouth on 23 July 1836, arriving in South Australian waters in December of that year, carrying 176 colonists, including CaptainJohn Hindmarsh, who was to become the first Governor of the new colony of South Australia following the proclamation of that colony on 28 December 1836. As a tribute, a replica of theBuffalo is moored in the Patawalonga River at Glenelg, a suburb of Adelaide. – Details as cited on wikipedia.